Rising With Confidence…by Lea Caughlan of The Rubber Rose

What does a sex shop have to do with ending violence against women and girls?

I started talking to folks about all these thoughts. And we keep talking about them.

At the Rubber Rose, which yes, is a boutique sex shop. We talk to folks daily about what a healthy relationship with yourself and others can do each individual and for all of us.

Perhaps, if we all became rooted and more comfortable in the skin we are in, in the body we walk around in each and every day, and gave it respect, and commanded respect, and in turn taught respect, perhaps that skin would feel like ours. Perhaps the soul that lives in that skin is simply surviving in this damaging society we live in, but perhaps it could fly free if given this respect, and, perhaps, could change the world.

It looks like a young couple exploring wants and desires for the first time together and actually talking about those desires, voicing their yeses and setting their limits for their nos and adding categories for maybes.

It looks like someone who was told that she was difficult and that no one else was going to ever make her feel good (even though that same person was responsible for all the bruises and emotional scars alongside the love bites and orgasms). It looks like that person deciding that pleasure is inherently within, and that pleasure lies in her own hands. No one else’s.

And maybe some of that sounds counterintuitive. Perhaps, while she was able to walk away from her abuser, she wasn’t able to stay away, because that person was the only one who ever told her she was beautiful. Maybe that person was the only person she had ever had sex with, or perhaps the only one with whom she had orgasmed. Perhaps try as she might, she just couldn’t stay away because with all the violence there was a co-dependence that looked like love, that felt like lust, that felt like being wanted, and she was afraid that without that person, her body just didn’t work the same.

And yet, perhaps, coming to us and either buying a toy or simply talking to us, and putting her own pleasure first, is the final string that cuts her free from that cycle.

Some folks joke that the products we sell are gonna replace them.  Usually I laugh with them saying that they are all just tools, toys, fun things to be used in collaboration. But the women who come to us to rebuild their bodies, to rebuild their trust in themselves, in their own pleasure, and in their own orgasms, they say yes. Yes, you were just replaced. And they smile.

This liberation also looks like folks who have never witnessed assault, or practiced violence, or been the victim of violence. Folks go about their lives confident, armed with knowledge and power of self, feeling secure in saying no, but also in saying yes. In saying, “this feels good, do this” instead of leaving pleasure up to someone else to pull from their bodies like some sort of treasure that is then owned.

This liberation is our goal: women who have never experienced destruction because the world belongs to them and they belong to the world and they shape it daily. We believe in that world, but today, we stay rooted in this one, knowing each person walking in has a story. We start there.

Just us, in a sex shop, in the skin we’re in. In solidarity.

Lea Caughlan is a sex educator and owner of the boutique sex shop, The Rubber Rose, in San Diego, California. She focuses on a sex positive, education-based approach to adult retail by creating a space where healthy and joyous exploration of sex and sexuality is encouraged and embraced. Determined to radicalize the sex toy industry, The Rubber Rose boasts a completely non-toxic selection of products which, in an unregulated (and toxic) industry, is a good find for the savvy shopper. Open since 2006, it exists to encourage people’s vision of the fluidity of sexuality and, by staying true to the mission, The Rubber Rose facilitates the development of a stronger, safer, and more educated sex positive community.

Starting this evening and running through Sunday night, our amazing San Diego V-Day Warriors will take to the stage in InnerMission Productions’ benefit performances of The Vagina Monologues and The MENding Monologues. Directed by Rhiannon Jones and Kurt Kalbfleisch, these performances promise to be provocative, heartfelt, creative, moving, passionate, and brave. These courageous men and women will bear their souls and touch your hearts. Are you ready?

Shows will be held at Eveoke Theatre (2811 University Ave) and tickets can be purchased here. Proceeds go to the Center for Community Solutions and V-Day.

Break a leg to our amazing casts and crews!

Posted on February 15, 2013 by 1billionrisingsd

Submitted from the Internet 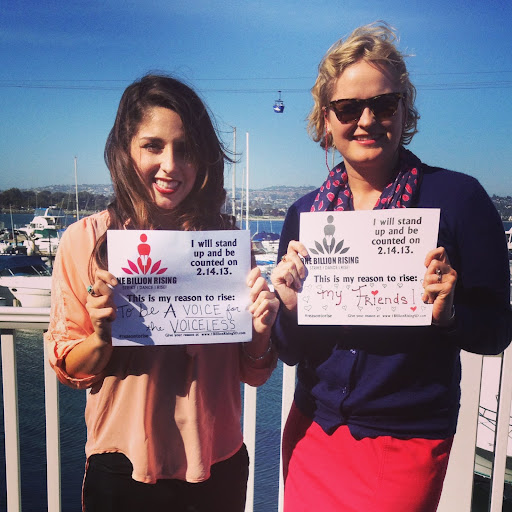 Submitted from the Internet.

This could have been anywhere
And was
Mexico City
Manila
Mumbai
Manhattan
Nighttime men
waiting
like wolves
Drooling
for prey
behind
that single dimly painted door
paying nothing
a couple of dollars
or euros
rubies
or pesos
to have her
Enter her
Eat her
Devour her
and throw away her bones.

Step into the fire

Eve Ensler for One Billion Rising 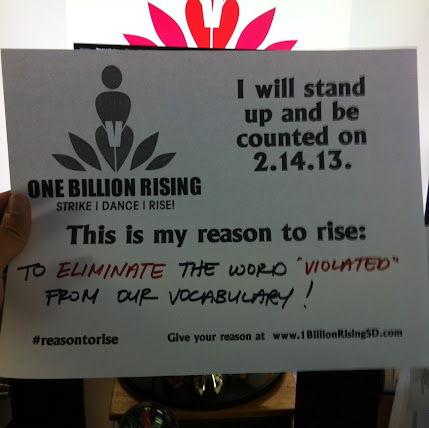 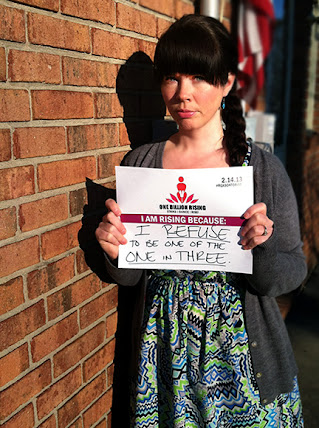 Some early-rising flash-mobbers were at KUSI this morning reminding people to RISE at 2:14; MARCH at 4:30 and DANCE at 6:30 p.m.

San Diego, We Rise With You…by Shael Norris of V-Day

I am so honored and proud to be a part of such amazingness happening all around the globe.  What you have done in San Diego has rippled and inspired organizers everywhere to go bigger and bolder than ever.  It is awe inspiring.  You are all my sheros and heros and are truly rocking it this year!

Waking up this morning, on the day we have been planning for since our last anniversary, I am anxious & excited & cannot WAIT to feel the tsunami of women and men around this world as we change the planet ~ rise, ride the wave we are sending from the East Coast & carry it all the way to Fiji!

With all my love,

Shael Norris is the Director of College and Community Campaigns for V-Day and has worked at V-Day since its inception in 1999, when she met Eve on the Off-Broadway production of The Vagina Monologues. She now resides in Rhode Island with her three children (Aela, Aidan and Natalie) and husband Jason.

The entire family will be road-tripping to the place where it all began for ONE BILLION RISING on February 14th ~ the Hammerstein Ballroom, NYC!

Posted on February 13, 2013 by 1billionrisingsd

ONE BILLION RISING in the Media

WATCH:
– Katie Couric Rises Up for “One Billion Rising” on Katie! >

Your One Billion Rising Event Check-List

RISERS are you ready? We know there are a lot of details to remember so we wanted to send you a quick One Billion Rising Check-List to help you make sure you have your bases covered!