Rising With Safety … by Nirvana Habash, Center for Community Solutions 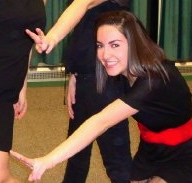 The first time I heard about The Vagina Monologues, I was auditioning for it. As a first year undergraduate student thousands of miles away from home, finding a place to fit in was supposed to be pretty difficult. But after a few months of involvement fairs and general interest meetings, I found a group to call my own for four incredible years.

In the audition room, the director asked me, “If your vagina had a name, what would it be?” In my 18 years of life, that was by far the most ridiculous and uncomfortable question anyone had ever asked me. For whatever reason, I answered. And by the time I was a senior, it was my turn to direct The Vagina Monologues.

My commitment was to build a safe place for female-identified people and our allies, a place where a victim-blaming rape culture was unfathomable. The solidarity we formed allowed us to open up about our experiences with sexual assault, relationship violence, and body image insecurity.

Directing The Vagina Monologues was my first experience as an advocate. It was a long time before I found out just how many cast members had been sexually assaulted; it was more than I could have imagined. Even one was too many.

The first woman who shared her story with me was nervous that her perpetrator would try to come to the show. As she was telling me what had happened, I thought to myself, “How can I protect her?” I did my best to comfort her, promising I’d escort him out myself if I needed to. She gave me his picture and I shared it with the crew to ensure he didn’t get inside the venue.

That was the first time I ever helped a survivor make a safety plan.

It wouldn’t be my last.

After graduating, I was hired as a Sexual Assault Victim Advocate at Center for Community Solutions (CCS). Over the last fourteen months, I have worked with more than 175 survivors of sexual assault and relationship violence. I have responded to numerous forensic exams after an assault is reported and I’ve attended dozens of court hearings to provide support to survivors who have to face their abusers again.

And I am just one employee of CCS.

In 1969, Center for Community Solutions was founded on the campus of San Diego State University. Like One Billion Rising, V-Day, and The Vagina Monologues, we believe there is a solution to ending sexual violence and that “one billion women violated is an atrocity.” Our mission is to end relationship and sexual violence by being a catalyst for caring communities and social justice.

In 43 years, we have grown in size and stature to include a 24-hour hotline, two emergency shelters, and three counseling offices. CCS staffs advocates for survivors of sexual assault, domestic violence and elder abuse. We provide legal assistance and therapy to our clients, and prevention and education to the community at large.

We offer non-judgmental support to survivors no matter their religion, race, age, sexual orientation, gender, documentation status or personal criminal history. No one deserves to be sexually assaulted and no one has the right to violate another’s body. As a matter of fact, the State of California has declared under Penal Code 679.04 a Survivor’s Right to an Advocate. Following an Empowerment Model, every CCS employee is charged with ensuring that we give informative and insightful facts to those we serve in the community and encourage each survivor to determine the best path to take on his or her healing journey.

Every day, we are one day closer to eradicating a culture that promotes rape jokes, victim blaming, and misogyny. Every year, we serve over 20,000 individuals in this community.

My journey with V-Day led me to my work here. I not only found a group to call my own that first year – I also found a path.

CCS is my safe place in San Diego, as it is for countless other women, men, and children. We are honored to be joining V-Day and InnerMission Productions to stand united with One Billion Rising and demand an end to sexual violence.

Nirvana Habash is an Iraqi-American who was raised in San Diego, California. She is a recent graduate of American University in Washington D.C. Her passion for social justice and women’s issues launched her career at CCS, where she recently became the Development Coordinator. She has performed in The Vagina Monologues twice and directed the show in 2011. Nirvana will join her sisters in D.C., San Diego, and worldwide who will be dancing on 2/14/13 as part of One Billion Rising.

4 Responses to Rising With Safety … by Nirvana Habash, Center for Community Solutions