One Billion Men Standing With Them…by Derek Dujardin, Creator of The MENding Monologues 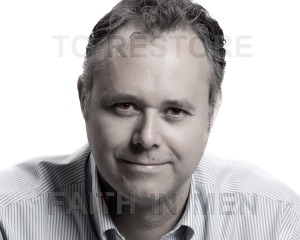 The MENding Monologues started with a simple question that I suspect hundreds, if not thousands of V-Day activists have asked since the movement started 15 years ago.

“How do we get more men involved in V-Day?”

Fortunately, a V-Day director named Mindy Mendelsohn and her producer Brenda Adelman asked me try something new. They asked me if I could put together a “men’s version” of The Vagina Monologues to raise money for a women’s shelter.

I gathered together a group of guys and we wrote some funny sketches based on the themes raised in The Vagina Monologues, without exploring them too in depth. I showed them to Mindy and Brenda and they said, “These are good, but do you realize this show is about stopping violence towards women and girls, right? Why don’t you guys write something deeper? Do you know any women who have ever been raped or abused?”

That’s when I cracked opened the door of the “Shame Vault.” I reached into my own personal history for a story I didn’t want to tell. (By the way, those are the best kind of stories to tell.)

I wrote about how when I was in college I ended up being friends with both a rapist and the woman he raped—and how I didn’t know it for more than a year.

Linda was a good friend of mine. Shortly after we met, she confided in me that she had been raped by her study partner. A year later, we were discussing my friend Dean, who pretends to get pissed off at his dates when they don’t want to have sex. He yells and screams and threatens to leave them. According to Dean, this manipulation works.

While Dean’s behavior appalled me, at that time, I was naïve enough to think giving into coercive pressure like that was somehow the woman’s fault. So, I asked Linda why women would have sex with a man who yells at them? Why couldn’t these women see through Dean’s ploy?

Linda very got quiet. Then, she told me that Dean was the guy who had raped her.

The rest of the story is about me trying to confront Dean in passive aggressive ways, like spray painting “rapist” on his car, slashing his tires, and ignoring his phone calls. It’s about me choosing to do these things instead of confronting him in a direct man-to-man conversation. And, finally, it’s about how I did nothing.

Even though this story had happened 20 years ago earlier, and even though I was no longer the scared, confused man-child I was then, it was still a story I didn’t want to tell. I had let a rapist get away with rape.

When I read my monologue aloud for the first time, emotions swept over me. I was crying, ashamed and purged. I looked up at the five guys in my group, and they also had tears in their eyes. For me, for Linda, for the tragedy of silence, we lamented that we, as men – individually and collectively, lack the courage to do what is right.

The MENding Monologues was born in that moment. For me that story has been transformed from one of closeted shame to one of power. 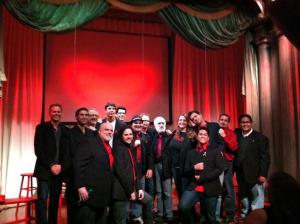 Derek and the San Diego cast
of The MENding Monologues, 2012
Photo: Paul Savage

I discovered I was not the only guy who had a secret.  They all had stories locked away in their “Shame Vaults” about sexual and gender violence, none of which I had ever heard before. These are men who were friends that I knew well. Once you let a little light into the Shame Vault, nothing can stay hidden for long. For the next five hours, we told and listened to our stories.

A father spoke of his 14-year-old daughter who was seduced and raped by a popular high school coach and a fellow teacher. A former Vietnam veteran spoke of calling in an airstrike which killed 81 villagers. Another man spoke of his family’s conspiracy to protect a grandfather who had molested nearly all the children and many of the grandchildren in their family.

These were just five guys. And they all had stories. Imagine a room with 25 guys! The message hit us lighting bolt: we began to understand that gender violence touches us all. And it’s not surprising that it does. After all, if one in three women are sexually or physically abused in their lifetime, that means each man has one in three women in his life who have either been abused or will be abused. I am fond of saying to the men: “One in three women. Think about that: Will it be your daughter, your mother or your sister?”

Many more stories have come to light over the five years that the MENdingwork has been on the planet. Today, we still cultivate and collect stories of violence done to both men and the women, and how it affects their lives and their relationships. We have collected the best of these stories into a script which available for communities and colleges to perform around the world. To date, the script has been performed dozens of times, and in places as far away as London, England and Pert, Australia. It was even adapted and performed in American Sign Language at deaf college in Vancouver, B.C.

The MENding Monologues is different from The Vagina Monologues in important way. Besides having a set script, we encourage and challenge the males who perform our work to write their own pieces. All men have stories. In telling them, we bring this stuff into the open. This is both confronting and liberating for them. In every writing circle I have hosted, I do my best to create safe space and a container for men to let their secrets out and in which to feel their emotions—without judgment. As Freud said, “Secrets make us sick.”

What has been the result of The MENding Monologues? It has empowered men to speak out against sexual and gender abuse. It has been a forum for them to say, “This is wrong,” and to participate in the conversation and the healing in ways that have not been available.

It has become vehicle of self-discovery as well. I have been told by dozens of men that their participation in The MENding has changed their lives. A few have been inspired to create their own groups similar to The MENding—with my blessing. That was never the intention, but what an amazing by-product! What I created to help women has, in turn, helped men as well.

And finally, I have been told by women that The MENding has affected their lives, too. My favorite quote overheard during Q & A after a show has become The MENding’s unofficial tagline. A woman stood up and said: “I think you just restored my faith in men.” Seeing men speak out against rape, abuse and violence gives women hope.

And, if there has ever been a time we needed to restore our faith in men—it’s now. As I read about the men who protected Jerry Sandusky and Jimmy Saville, it sickens me. Not because Sandusky and Saville are monsters. But because “good men” in position of authority allowed these monsters to live among us—often for years and even decades.

There will be a special performance of The MENding Monologues February 16, 2013 at the City of West Hollywood Library as part of their One Billion Rising event.  Visit www.themending.org for ticket information.

The MENding Monologues has also been performed as a companion piece to The Vagina Monologues in San Diego for four years and will continue to be a part of V-Day and One Billion Rising.  Check this blog for February dates and times as they are determined. 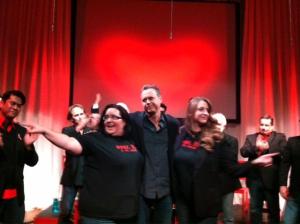 1 Response to One Billion Men Standing With Them…by Derek Dujardin, Creator of The MENding Monologues